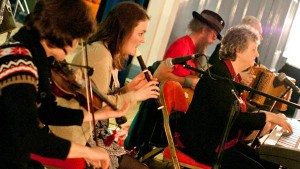 The Tattiehowkers was formed by musicians associated with The Kilmarnock Folk Club and has strong links with The Girvan Folk Festival.  The style of the band was influenced by the ‘bothy bands’, community musicians working on the farms and playing for their own entertainment. First and foremost a Ceilidh with The Tattiehowers is based around enjoyment and participation.

In many ways The Tattiehowkers can be credited with creating an interest in Ceilidh dancing throughout Ayrshire.  The band leader throughout its life has been Maggie Mcrae who has led various classes for Ceilidh Bands in Ayrshire.

Over the years many musicians have played with The Tattiehowkers and the line up for any particular ceilidh can often include guest musician or two!